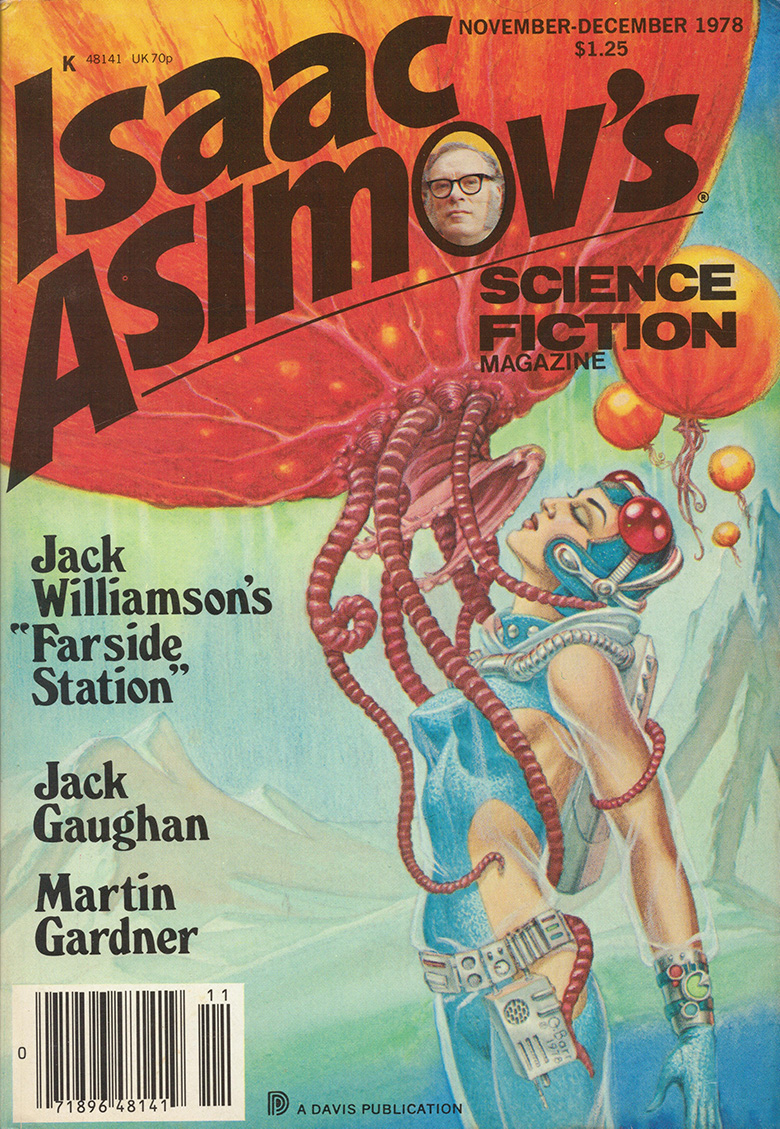 © 1978 by Robert Edward Eckels, reprinted by permission of the author

The author has been appearing regularly in Ellery Queen’s Mystery Magazine and Alfred Hitchcock’s Mystery Magazine, but this is his first SF sale—in the horrid pun department, as it happens. He works in Chicago and lives in the western suburbs, which gives him a lot of time for reading on the train. He has a wife, sons aged 8 and 10, a dog named Corn on the Cob, and a three-foot model of the USS United States (circa 1812) that he’s been working on for over a year.

Anxious to avoid the widespread ecological disasters that unrestricted human immigration had precipitated on earlier colonized planets, the Council of Earth Governments, prodded by the Society for the Preservation of Alien Lifeforms and Culture, dispatched a scientific survey expedition to Magnum Brut 74 with a view to determining in advance of declaring the newly discovered planet open for settlement how large—if any—a human population the existing eco-systems could support. Responsibility for conducting a comprehensive census of the indigenous species was assigned to Professor Herman Spatlese and his team of specialists from the World Population Control Center.

The team had already developed a special sensing device capable of identifying and classifying all life forms within a fifty-mile radius, and once the leaders of Magnum Brut’s primate population—a gentle people quickly classified by the enumeration team as Neo-humankind—became aware of the survey’s purpose they were quick to cooperate. Nevertheless, it wasn’t long before the team found itself faced with a seemingly insoluble problem—the Avians. Long the dominant species over a full third of the planet’s craggy surface and fiercely jealous of their independence these large winged creatures strongly resisted any attempt to penetrate their territory, using their hard beaks to smash the delicate sensors and even on occasion snatching team members up in their claws and carrying them off to drop in swamps or other equally unpleasant places. The final straw came when Professor Spatlese himself, venturing in under a flag of truce, was forced to run the better part of a mile pursued by furiously beating wings and shrill caws. In desperation he called an emergency conference of the senior members of his team.

“There’s only one solution,” Von Erdbeeren said. He was a short, stubby man with a bullet head and close-cropped iron gray hair. “Armed guards. Shoot the bastards out of the sky.”

“Impossible,” Juanita Chung protested. “Our mandate is to preserve the indigenous life, not destroy it.”

The two glared at each other. This was an old argument, but before it could go any further the professor held up a restraining hand. “Frankly,” he said, “I’m at a loss. I’ve considered arming our people, but I’m afraid that at best it would merely drive the Avians out of range of the sensors. At worst it would invite retaliation. So far, some of our people have been shaken up but none has been killed. We daren’t be the ones to escalate the conflict. But on the other hand, the only alternative seems to be to give up and admit we can’t complete our census of the Avians.”

“Perhaps not” Foster said. He didn’t usually speak much at these conferences and even now he sat off to one side quietly tamping tobacco into his pipe. “My son’s a film buff, and before the expedition left he insisted I accompany him to a showing at the Museum of Antique Cinema. At the time, I admit, I thought it a terrible bore, but as I think of it now—”

“What’s your idea?” Von Erdbeeren interrupted. “To set up a projector and count the Avians as they flock to see the film?”

“No,” Foster said, unruffled. ‘The film I recall dealt with the efforts of a group of men to drive off or destroy a large marine animal that was terrorizing what the film identified as the New Jersey coast. To study the beast more closely one of the men descended into the water protected by an iron cage. It seems to me our problem isn’t that dissimilar and perhaps we can solve it—” He touched fire to his pipe and spoke between puffs. “—the same way—by enclosing our enumerators in cages before sending them off into Avian territory.”

For a moment no one spoke. The Spatlese nodded thoughtfully. “It’s worth a try anyway,” he said. And that settled it. Two weeks later the first hastily improvised cage set on a heavy wagon frame and drawn by a drone tractor set for the Avian lands. The results were encouraging. Others followed and soon Spatlese was able to report proudly: “We’ve had great success with our closed-in counters of the bird kind.”